Close to Ito Port and the sea, the atmosphere is easy to enter for tourists. A communal bathhouse that is full of liveliness of locals 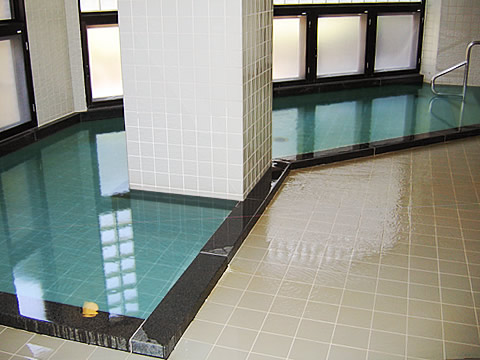 Plenty of hot water is flowing that is colorless, transparent and mild.

2-minute walk to the sea. The large parking lot makes it easy to use for tourists and is convenient for returning from the beach. 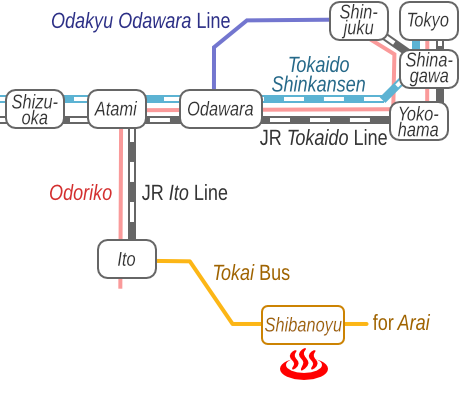 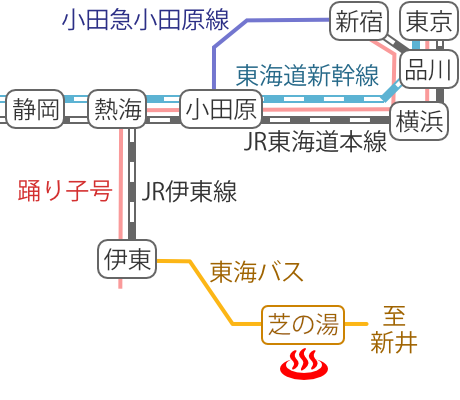 How to get to Bishamonten Shibanoyu

(→ Continuation from the 1st bath, Ebisu Arainoyu)
Nishi-san and Kita-san are visiting the bathhouses of the Seven Deities of Good Fortune in Ito Onsen today. The second hot spring bathhouse is Bishamonten Shibanoyu. About 4 to 5 minutes on foot from Arainoyu.

It's true. The daruma behind has fallen and a bit humorous.

By the way, as a precaution, do you intend to visit the temple associated with Bishamonten ...?

No way! If we do that, we'll have no time to go around all the Seven Deities of Good Fortune. Now, Let's get in!

♨ For Ito sightseeing with route buses, Tokai Bus' "Ito sightseeing freely ticket" may be reasonable. (Getting on and off freely within the area.
Adults: ¥ 1,300 / Children: ¥ 650)

♨ Bishamonten is the deity of war and victory. The temple related to Bishamonten is Butsugenji. It is about 300 m (984 ft) in straight line distance from Shibanoyu. 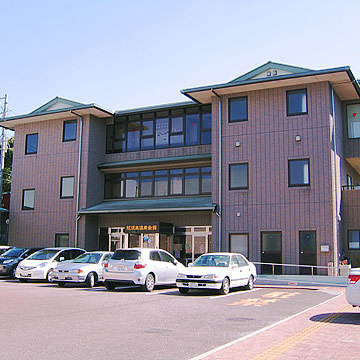 It has a big difference from Arainoyu just before. Its parking lot is large too.

It's new. Probably been renewal recently. It's too big for a community bathhouse.

Go through the goodwill with the illustration of Bishamonten and you will be in Shibanoyu.

Most customers are local regulars?

I guess so. It's a great building, but a communal bathhouse. Just a bath for the locals. 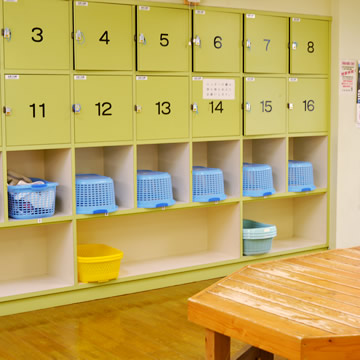 Bathing charge is 70 yen for the local person. Too modest ...

Get into the bathing room at once. Shibanoyu has a deformed bathtub, is elongated along the window, and has a pillar in the middle.

Oh? The bathtub is not in the center.

I think a bathtub in Ito is basically in the center. But I guess they has made it like that with renewal. I don't think they needed to put a pillar in the middle of the bathtub, though.

So true. But here, many customers have been coming.

In short, it's easy to come because of the large parking lot. Both locals and tourists.

♨ Shibanoyu moved to its current location and opened in 1999. Previously it was called Shizuumi bathhouse.

Yeah, and, the water itself is refreshing, it's so Ito Onsen, isn't it?

Well, let's get out now.

'Cause water is too hot. And, If we take it easy, we won't be able to go around all the Seven Deities of Good Fortune.

That's why Nishi-san and Kita-san wrapped up Bishamonten Shibanoyu early. Next is "Wada Jurojinnoyu" which is said to be the oldest in Ito Onsen. (→ Continue to the 3nd bath, Wada Jurojinnoyu)

♨ Previously, part of the Shibanoyu bathtub was a jacuzzi, but now it is not.

The water is colorless and transparent, and it itself has very few features. Hot and sharp impression water.

It is large and modern compared to other communal bathhouses. You can feel the liveliness of the local people. 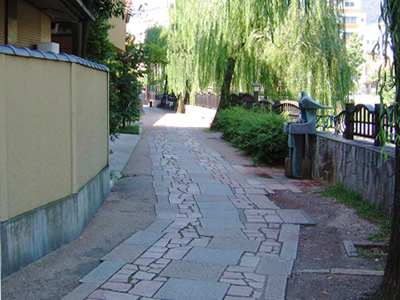 (Photo above: Matsukawa Promenade
below left: Tokaikan on the opposite riverside
below right: hot spring monument "Doves")

A promenade that runs along the Matsukawa River to Kawaguchi Park at the mouth of the river. Trees of willow and Sakura are planted, monuments are dotted and historical wooden buildings such as Tokaikan are reflected on the river surface. It's a bit of a taste, so it's good to have a walking slowly and cooling down after bath.