Secluded hot spring, Jikkoku Onsen. The magnificent views of the deep mountains approaching your eyes. If you visit, you'll definitely want to boast it 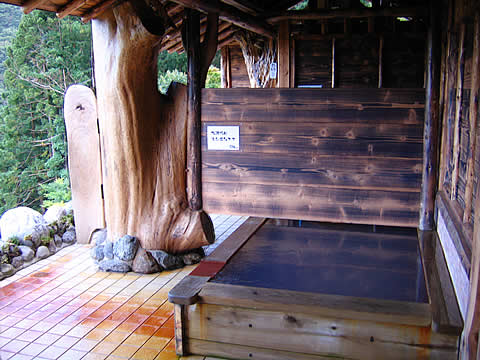 A secluded hot spring near the Oyanagawa Gorge located in the western of Yamanashi Prefecture. Yamanoyu is a hot spring inn, and Nagamenoyu is a view bath that is designed to be enjoyed by day-trippers. As the name implies, a superb view spreads in front of you.

The bath, which looks faintly purple, is the iron sulfate spring. You will want to soak in this mild water for a long time.

The building using plenty of burned cedar boards is handmade by the owner of Yamanoyu. 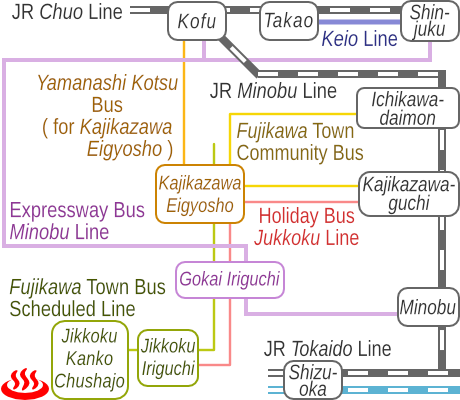 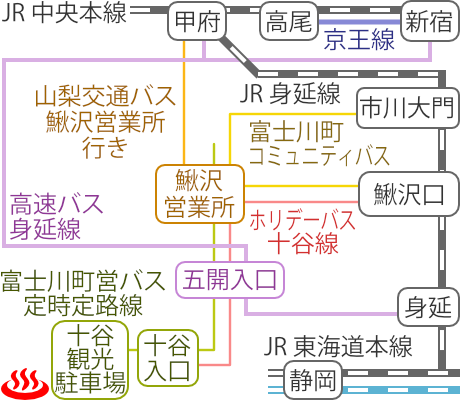 (from Kajikazawaguchi Sta. to Fuji Bridge)

(Directions from Fuji Bridge to Yamanoyu)

Nishi-san and Kita-san, today they are at Jikkoku Onsen located in the western of Yamanashi Prefecture. Even though the wind is the one of autumn, the sun is still having the full glare like midsummer. In the afternoon, while having Mimi (local dish in Yamanashi) at Tsukutabekan, Nishi-san and Kita-san talked about to get to Oyanagawa Gorge. Go down the back of Tsukutabekan and you will find the entrance to Oyanagawa Gorge. 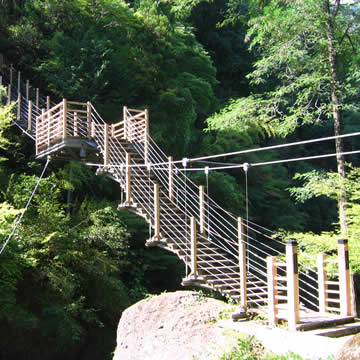 Oops! it shakes pretty much.

Either way, so don't shake it.

After Ryujin Bridge, they crossed a suspension bridge such as Ryusen Bridge, and at some waterfalls, they took plenty of negative ions. (However they both don't really understand what negative ions are.) After taking a stroll in the Oyanagawa Gorge for about an hour, the two get to the hot spring inn "Yamanoyu". You go up about 50 m (164 ft) from the Yamanoyu main building, then you can see "Nagamenoyu". 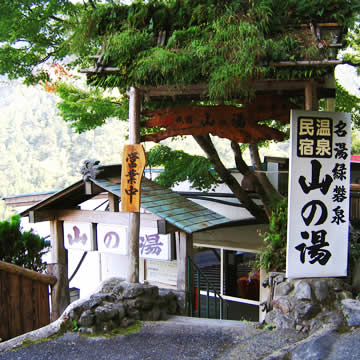 Oh, there is a hot spring mark.

We're going down this slope, so ... that building is it?

Deer horns are so many, aren't they?

Wow! It's a cliff right there! What a view!

No fences, no railings. If you slip, you'll fall down this cliff. 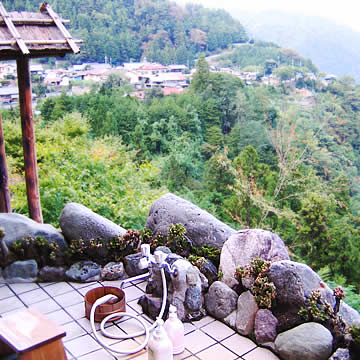 Washing area
(Beyond that is a cliff)

I agree. But if it has a fence, the charm of the view will be cut in half. It's not bad to make the good view a priority.

If with small children, you have to keep an eye on them.

But, it's a feeling of liberation more than imagination that nothing block the view. 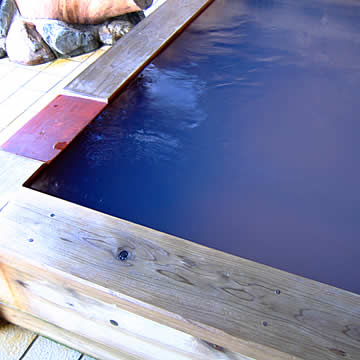 True, A really beautiful color. Does it reflect the color of the sky?

They get into the bathtub at once. The bathtub is not that big and is full of three people.

The temperature is not too hot. In summer, it's just right.

Oh, the bathtubs are connected by men and women. I mean, they just put a blindfold on one bathtub. In short, it was a gender-mixed bath, but has been divided later. 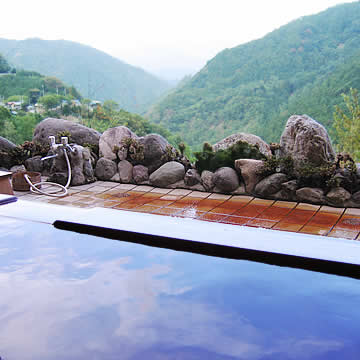 Because the view is not blocked by walls or fences, they can enjoy the scenery of the mountains while soaking in hot water.

Phew, this view in a tub is the best.

Exactly. Because you can't see the outside view from bathtubs in a lot of onsen, so this is rare.

I think it would be so great in the season of autumn leaves.

In addition, the water is fresh, so it feels good. Not so many people may come to here.

It's not easy to come, and not famous. This onsen may be a well-kept secret place, you know.

The breeze of mountains was cool and so good feel, Nishi-san and Kita-san soaked in the bath for a long time.

♨ Tsukutabekan was named after the initials of cooking, eating and feeling. It has cooking classes using local foods. A facility that seems to be handled by local middle aged women. (→ Fujikawa Town website _ Tsukutabekan)

♨ "Mimi" is a local dish with Japanese-style short pasta and root vegetables.

♨ "Yamanoyu" is a hot spring inn. The bathing room in the main building is for guests staying only. "Nagamenoyu" can be used by non-staying tourists.

Hot water that is circulating but impressive. Since the hot water was in good condition, there may be a large proportion of flowing water.

Great location. If it is bigger, nothing to say. A hot spring that makes you want to come again in another season. 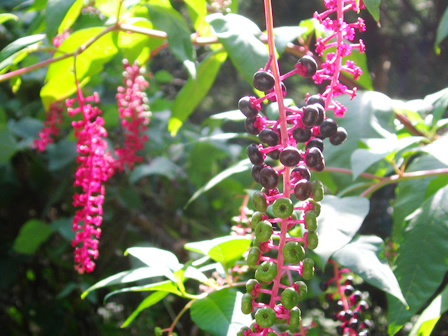 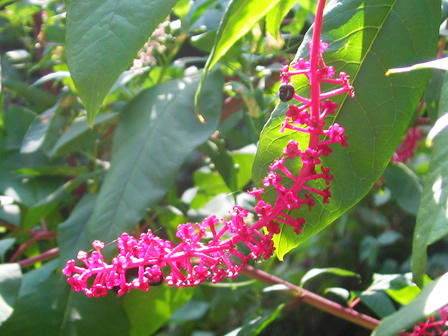 Stem of a bunch of mountain grapes

A stem of a bunch of mountain grapes after the grains have fallen. A cute and grotesque shape in the color of shocking pink. It's a surreal and pop object. Nature is an amazing artist.