A valuable experience that allows you to take a bath in the important cultural property! A romantic hot spring filled with beautiful tiles and sculptures 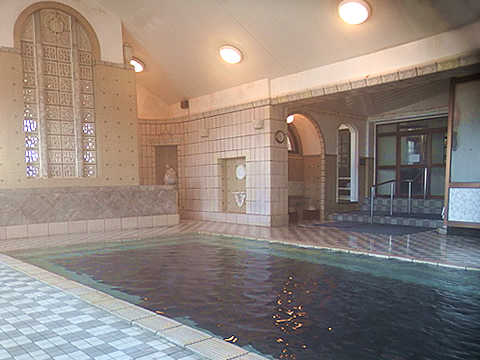 Katakurakan is a building completed in 1928 as a hall for welfare and socializing of local residents by the Katakura Zaibatsu, which made a fortune in exporting silk products. The retro Western-style architecture is a nationally designated important cultural property.

Located on the shore of Lake Suwa, you can see the lake from the rooftop. It is very close to Kamisuwa Station and is definitely a must-see for sightseeing in Suwa.

How to get to Katakurakan

Today, Nishi-san and Kita-san have been in Kamisuwa Onsen where on the shores of Lake Suwa. They've started walking to Katakurakan from JR Kamisuwa Station.

By the way, Katakurakan is often mentioned in Suwa's tourist informations, but what is the highlight?

The architecture seems to be pretty interesting. And, the Senninburo here is famous, so I wanted to go there once.

They have arrived at Katakurakan. 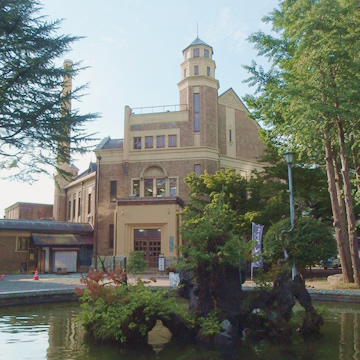 Wow, this is it! How can I explain it? It's a fairy tale building! Or it looks to appear in girls manga. When was it built?

Taisho era, or the beginning of Showa era, I think.

Then, when Western-style architecture was still rare. No, it may not have been rare in Tokyo, but in Suwa it was rare, you know.

Still, it seems to have been arranged in a Japanese way. And, the public bath was made inside and opened up for locals, so it was so novel at that time, I guess.

That makes sense. If you say so, this design might be unique.

Right away getting into Katakurakan. The reception is in front and the men's bath is on the right. Nishi-san and Kita-san are heading to the undressing room. 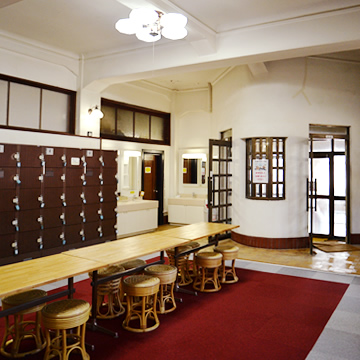 It has a nice atmosphere.

The bathing room has a washing area on the right and a jacuzzi on the left. But, The first thing that jumps into your eyes is the large bathtub "Senninburo" located in front. 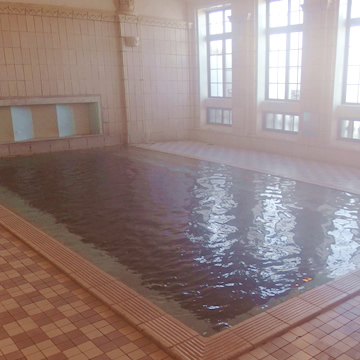 Oh! This is Senninburo! It's pretty big, you know. And really bright.

Exactly. It has a different taste from Japanese hot springs. It might be including some of the longing for the West.

They soak in the bathtub at once.

Oh, deep! And what is this? Stones?

It's true. Pebbles are covering the bottom. It's like the effect of stepping on bamboo.

You mean I can massage the pressure points on my feet just standing and walking?

In short, the concept is to be healthy while taking a bath.

I got it. It's a kind of exercise rather than laid-back soaking in hot water. By the way, even though it's called 1000 people bathtub, 1000 people will not be able to soak in here. Absolutely impossible.

♨ Katakurakan was completed in 1928. As the architectures at the same period, Imperial Hotel designed by Frank Lloyd Wright was 1923, and Hibiya Public Hall was 1929.

After the bathing, they're walking and looking around the inside of Katakurakan Bathhouse. Up the stairs, there is a break room and a dining room on the second floor, and you can go up from there to the rooftop.

After taking a look at the Bathhouse, they go to visit the Hall next. For tours without a guide of Katakurakan Hall, you don't need to make a reservation. In that case, you can feel free to look around after receiving the explanation of the route.

It's Western style to the entrance, but it's Japanese style from the back of this corridor. I think also the Former Furukawa House in Komagome has Japanese-style rooms. In this era, many buildings might have been built with a mixture style of Japanese and Western. 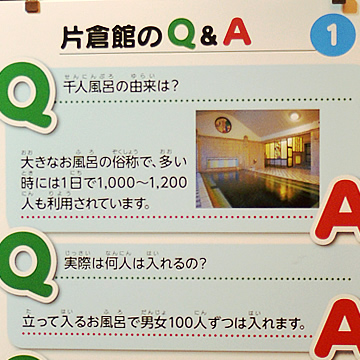 In short, it means a large bathtub. Actually, it says just a hundred people can get in it at a time.

Then, that should be called one hundred people bathtub, you know.

Could be. Then next, let's go up to the second floor.

♨ The Former Furukawa House in Tokyo was designed by Josiah Conder and completed in 1917. (For details, see Otani Museum website) 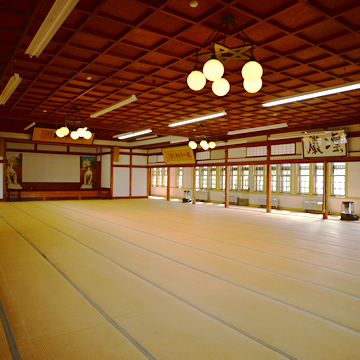 It was the Katakurakan tour which had some highlights, such as the 200-tatami hall and looking for the relief of "Guardian Bear". Nishi-san and Kita-san were satisfied with the fulfilling experience. (→ Continue to Kamisuwa Onsen Shibunoyu)

♨ Other than Katakurakan, Shimoda in Izu and Sukayu Onsen in Aomori also has the bath called "Senninburo".

The hot water has no feature. But here it's better to enjoy the building and the atmosphere than hot water.

Important cultural property buildings and unique bathtub are interesting in the sense that the out of the ordinary experiences. 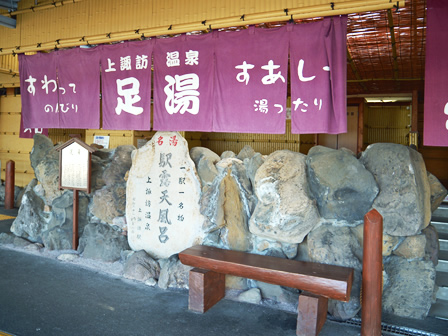 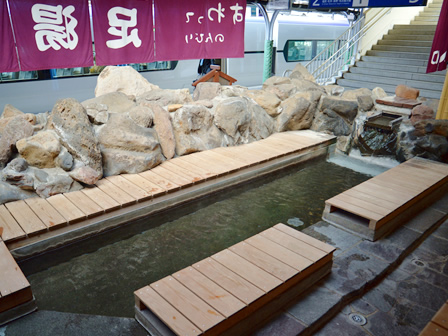 Kamisuwa Station has a footbath on the platform. You can take a footbath on free of charge in a short time while waiting for the train. For train lovers, and hot spring lovers, it's like a dreamland where you can enjoy a hot spring while watching the passing train.