Under the plants rooted in the rocks around the bathtub, healing the fatigue of climbing Yatsugatake with a rare carbon dioxide spring in Japan 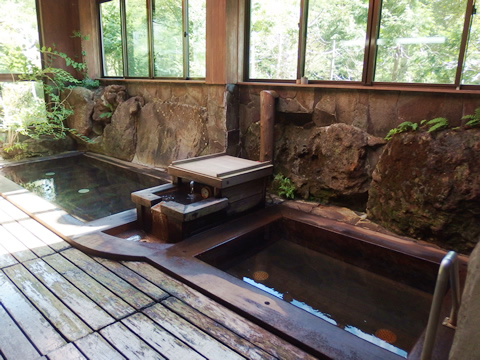 The spring quality is carbon dioxide spring which is rare in Japan, and is said to have blood circulation promoting and beautiful skin effects. Yunohana is dancing in a bathtub filled with hot water containing slightly carbonated, sour and iron tastes.

Even though it is indoor bath, on the rocks around the bathtub are moss-grown and ferns grow large. And hot water falls down from over 3 meters (10 ft) of large rocks. If you soak in this lukewarm water, it is as if you are leaving yourself in the wilderness of Yatsugatake.

Located in Yatsugatake Quasi-National Park, it is convenient for starting and ending Yatsugatake mountain climbing. Unlike the conventional concept of a mountain hut, it is a clean and well-maintained building. The colorful dried flowers decorate the corridor and dining room, and are popular with female customers.

How to get to Karasawa-kosen

(→ Continuation from Oku-tateshina Onsen Shibu Gotenyu)
In the morning, Nishi-san and Kita-san enjoyed Shibu Gotenyu. Next, they head to "Karasawa-kosen", the inn located at starting point for Yatsugatake climbing. Even though saying "starting point for Yatsugatake climbing", the two will not to climb Yatsugatake, their plan is only taking a bath. Of course, they don't have any equipment for climbing ...

Well, the path to Karasawa-kosen should be around here ... 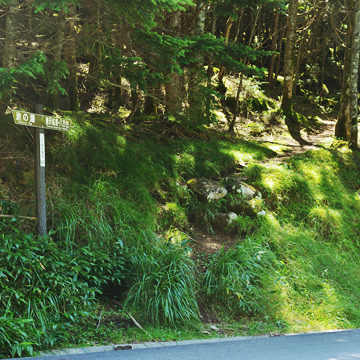 Entrance of the mountain path to Karasawa-kosen

Are you serious? Is this the way? Do you think we can go?

We've come this far, have to go.

The two step into the mountain path.

♨ Karasawa-kosen is located at an altitude of 1,870 m (6,135 ft). During the winter season (mid January to early April) it will be closed due to snow.

Right. But the weather is fine, in short, it's a little walk in a mountain.

True. It seems no problem unless twisting my foot. By the way, how far do we climb? To the top of Yatsugatake?

No, we won't go to the top of Yatsugatake, unless we mistake the path.

Fortunately, they did not go to the top of Yatsugatake and the path turned downhill.

But, it's so quiet. I feel clear my head. It's not bad to climb a mountain, you know.

♨ No bus runs on Karasawa Road where Karasawa-kosen is located. So, in case of you use the bus to get to, it is common to go through the mountain path from Shibunoyu Bus Stop or Tatsunokan-mae Bus Stop.

Oh? Sounds of water. Is there a brook around here?

Oh, I see. Which means, already close to?

The path ends at the Karasawa-kosen parking lot. They have finally arrived at the destination. 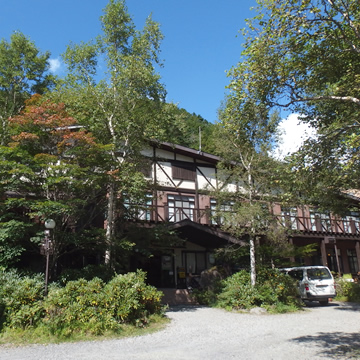 Now, we've arrived! I was a little tired, but pretty interesting. ... Oh, Karasawa-kosen is bigger and better than I thought. I thought it was a beat-up hut.

Exactly. It has a really fancy appearance.

The inside is ... it's pretty beautiful. Is it still new?

I heard it was a popular inn for female customers, it makes sense. It looks clean.

They go straight to head to the bathing room of Karasawa-kosen after reception.

Oh, the windows are big and bright!

It's not an open-air bath, but it feels like connected to the outside. The atmosphere is so good.

A small bathtub near the entrance is lukewarm, and a large bathtub is normal temperature. Nishi-san gets into the small one and Kita-san choose the large. 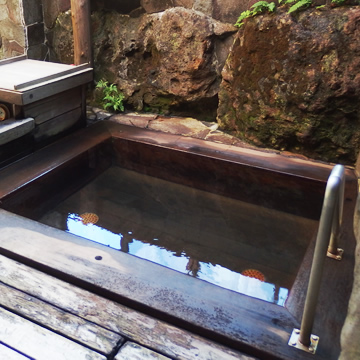 Because "kosen", the source is cold, right?

You're right. The fact that this bathtub is lukewarm may mean that the proportion of the source is higher. And, it looks like has more yunohana too.

I see. But this large one is good too. The grasses or trees planting on this rock makes good feeling. Flowers are blooming too. I wonder that growing from this rock ... 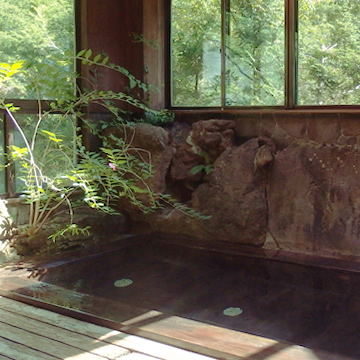 The rocks and plants make an outdoor atmosphere. Even though it's indoors.

Look, the rock of the waterfall shower is so big too. Like a real waterfall, isn't it?

The waterfall shower ... It may be the source.

Oops! Cold! This is really too cold!

Is it cold? Then you can only use it when you train.

After enjoying the hot spring water of Karasawa-kosen, they have a break and a light meal in the dining room.

Wow! There are so many dried flowers hanging on the ceiling.

The flowers are decorated here and there, such as in the corridor. The owner here may like it.

It's OK to stay at a clean mountain hut like this. You know, some mountain huts have strange smells. I hate it, but here, there is no such thing.

♨ "Sawa" of "Karasawa" means a brook in a mountain.

Legs are just for a show! The brass doesn't understand like that!

After talking again about whether Kita-san's lines are sound similar or not, then Nishi-san and Kita-san are cooling down with Yatsugatake Farm ice cream. Although they don't climb in earnest, they've get to agree that Yatsugatake is a nice place. It seems that the dry sunshine and cool breeze through the windows are saying the end of a short summer.

♨ If you stay, they provide a pick-up from Chino Station. (Reservation required)

The source has a faint sulfur odor, a sour and iron taste. There are yunohana in the bathtub, and even though the water is circulated, it's a good hot spring.

It is good to feel the outside nature with large windows, rocks and plants. But I would like them to make an open-air bath if it's possible.

According to the Karasawa-kosen website, "Abundant amount of hot water of about 600 liters per minute is naturally springing out." 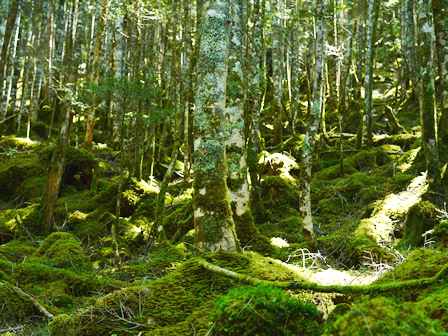 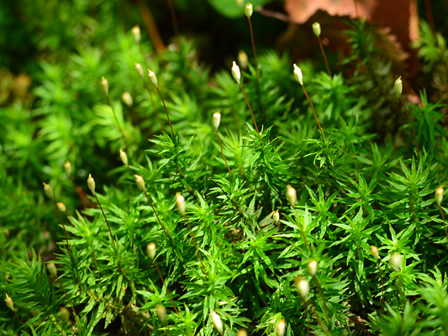 The environment around Yatsugatake seems to be suitable for growing moss, and you can see moss covering rocks and trees here and there. Famous is so-called "The Moss Forest", around Shirakoma Pond in Kita-Yatsugatake. But even on the mountain path from Shibunoyu Bus Stop to Karasawa-kosen, you can see the beautiful scenery of moss. Even if you are not good at climbing, you can relatively easily see the moss-spread forest on this path. Depending on the weather and light conditions, you may be able to meet Ghibli's world-like sight.